Leading the way to modern wellness

Opened in July 2013, Chicago CryoSpa was the first Cryotherapy spa in Chicago and the eighth in the country. Chicago CryoSpa was conceptualized by Jim Karas, who suffered a partially torn Achilles which needed an alternative solution. When traveling to Los Angeles, Jim visited Cryo Healthcare, owned by Dr. Jonas Kuehne and Robin Kuehne, and after five whole body and local treatments (specifically on the injured Achilles, Karas was "cured" and immediately purchased the equipment and opened the space on Lincoln Avenue across the street from his personal training studio.

‍The immediate response to Chicago CryoSpa had been overwhelming. As Karas has successfully been in the weight loss and fitness business for over 35 years, many opportunities have come his way. Let’s face it, the man who kept Hugh Jackman and Diane Sawyer in top form and has written seven New York Times bestsellers has to be in high demand. Not one opportunity has compelled him to take such immediate action with the exception of Cryotherapy.

Jim Karas is a Lifestyle Expert who combines a degree from the Wharton School of Business with 35+ years of unparalleled success in helping people look and feel their very best.

Jim is the author of the #1 New York Times bestseller, The Business Plan for the Body, the New York Times bestsellers, The Cardio-Free Diet, The 7-Day Energy Surge, The Petite Advantage Diet, Flip The Switch and The Ultimate Diet Revolution. His newest book, Confessions of a Division-1 Athlete was released in June of 2021, co-authored with his daughter, Olivia Karas.

Jim has been the Fitness Contributor on ABC's Good Morning America (he helped former co-host Diane Sawyer lose over 25 pounds), is frequently seen on 20/20 and The Dr. Oz Show.

Jim is widely sought after as a keynote speaker for many of the world’s most prominent corporations and organizations such as Oprah’s O You, Kraft Foods, Fortune Brands, Blue Cross BlueShield, the Federal Reserve, the Chicago Mercantile Exchange and Young and World Presidents’ Organization.

Jim has served as a Contributing Editor for Good Housekeeping magazine and has written feature articles for countless other national publications, including “O” The Oprah Magazine (he helped Editor-At Large and Oprah’s bff, Gayle King, lose 25 pounds) Jim and his team of trainers have personally worked with People magazine’s “Sexiest Man Alive,” Hugh Jackman, and with countless other celebrities, CEOs and Soccer Moms in Chicago and New York. 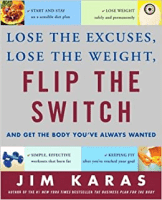 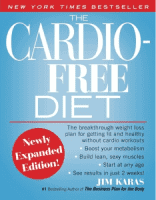 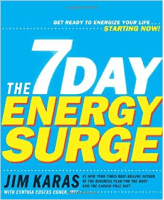 Is cardio-free the way to be?

Chicago father, daughter share the life of a Division I athlete

How does Cryotherapy work?
Cryotherapy uses the gaseous form of nitrogen to lower the client’s skin surface temperature from normal body temperature to 40-50 degrees Fahrenheit in 30 seconds or less and keeps it that way for two-three minutes. The skin reacts to the cold and sends messages to the brain that acts as a stimulant to the regulatory functions of the body. It produces the scanning of all areas that may not be working to their fullest potential.
Is it comfortable? What do I wear?
Before entering the Cryo Chamber, clients are required to dress in protective clothing composed of cotton socks and gloves. Men are required to wear underwear while in the Cryo Chamber. You will also be provided with a robe, which you will remove once you are inside the Cryo Chamber and the door is closed. Only your hands and face are visible to the operator during the procedure, so modesty is preserved at all times. Additionally, it is a dry, gaseous cold. Which means the treatment is tolerable even to those who may consider themselves cold-intolerant.
Can I catch a cold because of this procedure?
No. The immediate cold impact of the Cryo Chamber will raise the internal body temperature for a short period of time. The stimulation of the immune system can help decrease the severity and frequency of future colds.
I heard working out after treatment is a good idea?
Although your core body temperature will not drop during the 3 minute Cryotherapy treatment, it may start to cool a couple of degrees after exiting the chamber due to your body’s heat loss. To stabilize your body’s temperature as well as promote vasodilatation (expansion of the body’s blood vessels) it is recommended that 10 minutes of light exercise be performed post Cryotherapy. The movement will induce more rapid vasodilatation of the vessels and capillaries and can extend the period of analgesia (pain relief) as well as feelings of well-being.
Who should NOT use Whole Body Cryotherapy?
The following conditions are contraindications to whole body cryotherapy: Pregnancy, severe Hypertension (BP > 180/100), acute or recent myocardial infarction, unstable angina pectoris, arrhythmia, symptomatic cardiovascular disease, cardiac pacemaker, peripheral arterial occlusive disease, venous thrombosis, acute or recent cerebrovascular accident, uncontrolled seizures, Raynaud’s Syndrome, fever, tumor disease, symptomatic lung disorders, bleeding disorders, severe anemia, infection, claustrophobia, cold allergy, age less than 18 years (parental consent to treatment needed), acute kidney and urinary tract diseases.
How many treatments should I take to achieve optimal results?
Depending on the condition of treatment, you should initially take 5 to 10 sessions in close succession to maximize your results.
Who developed the Cryotherapy technology?
Whole body Cryotherapy was originally developed in Japan in 1978, and the benefits have been studied and refined in Europe since that time.
I am claustrophobic. May I use whole body cryotherapy?
Yes, you may. The door is never locked and you may step out at any moment. The chamber is open at the top and your head is raised above the level of the upper rim of the chamber. Additionally, you can see our provider at all times and we try to keep you distracted for your two minute treatment.
Is nitrogen dangerous to human beings?
No! Nitrogen is a non-toxic gas. In fact, the air that we breathe is made up of 78% nitrogen, 21% oxygen, and 1% other gases, including carbon dioxide.
What are the risks of Whole Body Cryotherapy?
Whole Body Cryohtherapy is very well tolerated and has minimal risks: Fluctuations in blood pressure during the procedure by up to 10 points systolically (this effect reverses after the end of the procedure, as peripheral circulation returns to normal), allergic reaction to extreme cold (rare), claustrophobia, anxiety, activation of some viral conditions (cold sores) etc. due to stimulation of the immune system.
How do I feel after I finish a treatment?
During each session the body releases endorphins, which are hormones that make you feel good and energetic. The buoyant effects from each session last at least six – eight hours and increase with number of treatment sessions. Many clients have expressed that they have the best night of sleep after a Cryo session.
Do I have to take a shower before and/or after the procedure?
No, you don’t. This procedure is absolutely dry and does not make your skin wet. We have many clients who pop over during a lunch break or on their way to work!

Join us at our convenient
location in Lincoln Park

New here? Join our newsletter for updates and promos

You're subscribed!
Oops! Something went wrong while submitting the form.